A Taste of WCT 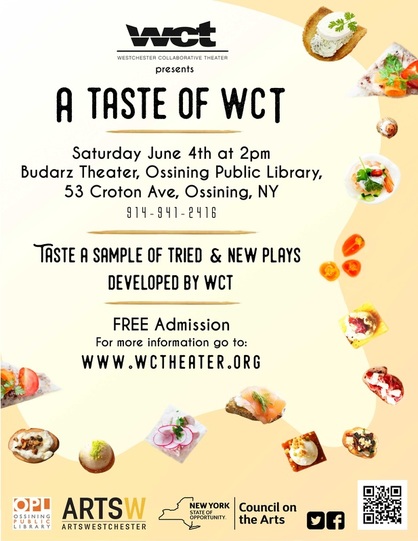 Did you come and enjoy a tasty sampling of Westchester Collaborative Theater works....
Admission was FREE!  Only one performance of this delectable event!

JOE ALBERT LIMA is an actor, playwright, and director. His first one act play A Clean Shoot?, was accepted into the Samuel French/Love Creek One Act Play Festival in 2003 and has been produced in several venues in New York metropolitan area resulting in over 25 performances.  A Matter of the Truth, which twice received an Honorable Mention in the America's Best Screenplay Competition. As an actor, Joe has appeared in about 70 plays in the New York Metropolitan area. His favorite roles are Hoke in Driving Miss Daisy and Gabe in Fences. Joe has directed over 20 plays, most recently, A Time to Kill and Intimate Apparel at Elmwood Playhouse and Radio Gulf at Shades Repertory. He has directed several One Acts here at WCT as well as the production of Pyre.
CAST

From the 2016 Living Art Event:  The Reveal by Linda Bidwell Delaney

LINDA BIDWELL DELANEY is a playwright, poet and lyricist who has been writing and studying writing off and on for over 25 years.  She recently relocated to Westchester County from New York’s Capital Region where her works for adult and family audiences were produced by a number of theaters in venues ranging from church basements to libraries, the TANYS festival, and the Proctors Mainstage Theatre. This is her first firehouse.  She is a proud member of the Dramatists Guild of America.
CAST
Westchester Collaborative Theater is committed to develop of local new plays.
These pieces have already been workshopped in WCT labs and our collaborative dramaturg process.